So this past week has been wicked busy with figuring out the placement test, classes, books, and general life now that the program won’t feed us family style every day.

On Monday we had the placement test, which is designed to test every single foreign students’ Chinese ability. This means that everyone from elementary Chinese to ‘can discuss foreign politics casually’ is tested. I have never taken a more difficult test in my life, and may never do so again. Not only is is extremely difficult, but it is also in another language, so if you don’t understand the question, or any answer given, you’re screwed. As the test became harder and harder, it became a nice game of guessing. We were meant to go to a lantern festival that night, but sadly it was way too windy and it ended up being canceled.

However, because it was the end of the Spring Festival, there were fireworks everywhere. And China does not have restrictions on when or where or how much or what type. Every few blocks, people were shooting off fireworks right in the street. There were some right outside the window, and we could see about 6 other places in the distance shooting off more. Safety be damned it looked awesome!

In our program, we have a pretty nice spread of different levels. I’m in a quasi-intermediate level, which is a lower level, with my friend Gretchen, and I have friends who are in the highest advanced classes. On Tuesday, we got told our levels the old fashioned way. For some reason, BeiDa still posts placements and classes on a physical wall. So we had to get up early to head over to the Chinese School’s building, where everyone would crowd around the wall and take a picture of their placement and then their class schedule a bit later when those are posted.

In celebration though, we did go to see an acrobatic show. It was a small showing and kind of hilarious, but the acrobats did some amazing tricks and really showed their talents.

There were some funny moments, like a hilarious hat dance with a bunch of guys, each with 3 or 4 hats, and there were also some more serious dance pieces that were beautiful. They ended the show by putting 7 motorcyclists in a metal ball. Watching them spin around, narrowly missing each other was spectacular.

Wednesday was when classes started. I’m only taking 4 classes; a KouYu (speaking), HanYu (characters), TingLi (listening), and a International Business Negotiation class (taught in English). So far my classes aren’t too difficult, but they did just start. We also have almost all the same classmates for each class, so I’ll get to know them pretty well whether I like it or not.

Everyone in my class seems really great to far though, and I’m even in class with my friend Gretchen already. We do have a really diverse class too. We have 2 people from England, a girl from France, a Mexican guy, an Australian guy, a guy from Finland, a girl from Russia, a Korean girl, and a good handful of Americans.

I’ve spent most of my time this week studying, practicing, and exploring campus a little more. I’ve found some good study spots, and great places to eat. I spent the weekend finally relaxing. After a long 2 weeks, it was nice to rest and catch up on some American stuff. Though it is pretty hard to get onto Facebook and stuff unless I’m in my room, I don’t mind too much.

On Sunday, I went to the BeiDa gardens to relax a bit and study by the lake. It was a beautiful view, and although it’s been pretty windy, it was still a nice day. We’ve been very lucky that we haven’t had a day over 200 on the AQI scale, but I’ve heard we’re going to get some bad days soon. I already have a nice fancy mask for when that does happen though. I’ve had to worry about the water pollution more, because it’s a real hassle to boil or buy water anytime I’m thirsty. It’s also a weird habit to get into of not using the tap when you need to brush your teeth. 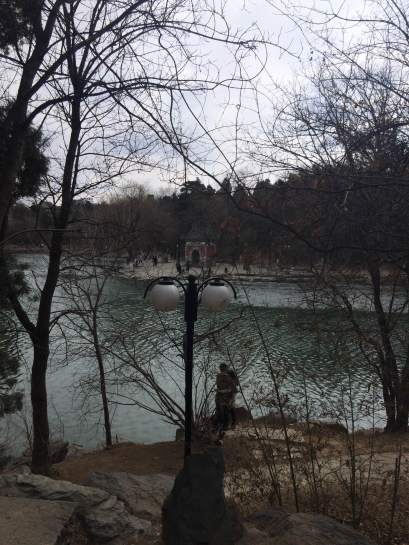 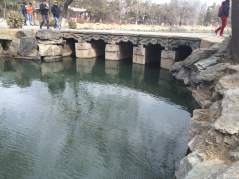 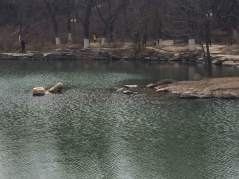 There are a lot of small things like that that actually aren’t that hard to get used to. Like, most Chinese people don’t have personal space, or are very patience with foreigners (unlike the USA). However, there are still small societal things that I still haven’t picked up on. For example, I don’t know think people often take the stairs in China. Or at least it is not common place to in my building. I decided to take the stairs this afternoon, and when I exited into the lobby, I came through a pretty small door and the security guard there gave me a very strange look.

I don’t know if taking the stairs is really uncommon or really strange or something, but he seemed very surprised and confused that I had come out of that door, as if it was an ’employees only’ section, but it was just the stairs.

For dinner tonight I got some soup from a place we call Chinese Chipotle or Build-a-Soup. It’s a really good place, and like most of China, pretty cheap.Comparing prices is very weird here, because some things seem so expensive, but when you do the conversion, it’s so cheap. One of the most expensive places people eat is an American place that serves some great brunch (so I’ve been told). But a meal there is about 50 kuai. Expensive right? That’s actually about 7-8 bucks, and that’s the most expensive place people usually go.

Other than all that, not much has gone on in the past week. I have had some plug converter drama, but long story short, you don’t need a converter unless you have a 3 pronged plug, and then those converters are wicked hard to find. Also, check yourself before you wreck yourself because you may accidentally kind of blow a fuse, but after a few switch changes and a bit of help from the front desk, there’s no problem at all.

So I’ve actually been doing everything from my phone these past 2 weeks because my laptop has been dead, but I’ve borrowed a converter so I can catch up on stuff. It’s a little inconvenient, but it’s been working good enough. Hopefully I’ll be able to figure it all out this week so I can get back to using my laptop.